Construction of diorama and combat model 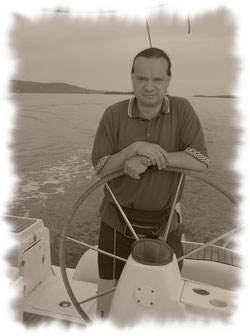 My name is Aleš Chmelař. I was born on October 8, 1972, in Prague. Since early childhood, I have been a dedicated model builder. From simple cut-outs from the popular Czech children’s magazine ABC to plastic airplanes manufactured domestically, when I only pasted the decals without painting the models. Like all beginners, I then gradually began to try my hand at painting models.

While visiting a friend, I caught a glimpse of an airplane on his desk. He had colored it with UNICOL MODEL paints. It was one of the first milestones of my development as a model builder. This painted model had an absolutely different dimension. I began buying paints and, using a brush, I made crude improvements to all my model planes.

After the Velvet Revolution, in the no-longer existing shop DTM, I saw the first 1:72-scale models, manufactured by ESCI, of combat vehicles. That day I brought many such models home and, equipped with a paint brush, made my first attempts at spattering many of them with camouflage with the aid of plastic foam stuffed into a mechanical pencil. I have fond memories of that period. I assembled models at a dizzying speed while not bound by any historical facts or need for perfection. 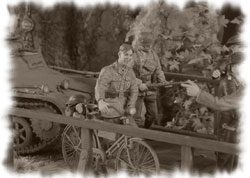 Getting my hands on a catalogue from VERLINDEN in 1988 and seeing gorgeous models and parts of dioramas with precisely situated models revolutionized my life. This was it! The models had life, I saw figurines and the surrounding terrain, and they gave the impression of absolute harmony with reality. Also, they established my preference for 1:35-scale models, which have captivated me to this day. Everything was more detailed, more accessible, and this scale was better at breathing life into the figurines. Although I must admit that at the beginning, due to my enthusiasm and the speed with which I was assembling the models, my initial efforts did not exactly effervesce with life. So I began to devote myself to dioramas.

What exactly is a DIORAMA? To me, a diorama is a captured moment, activity, or event that happened, or was very likely to have happened. Upon hearing the word "diorama", many people who have never heard anything about model building imagine the celebrated Marold´s panorama of the famous Battle of Lipan, situated in Prague. This is really a panorama in which the dominant element is a painting in the background, with weapons and equipment scattered about in front of it. The painting in the background intensifies the depth of the scene, thereby offering visitors a view over the battlefield. However, everything in this case is actually presented in a 1:1 scale. 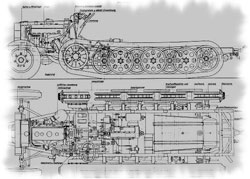 In model building, we still use the term diorama. In my case, this involves figurines, combat vehicles and weaponry, and the surrounding terrain. However, what would a model be like if it weren’t diminished in size? With great interest, I am devoted to building 1:35 scale models and I focus on the Second World War, that is during the period between 1939 and 1945. In a classic model builder´s diorama, however, there is no background. Everything is firmly established on a foundation that simultaneously sets the boundaries of the expanse of the scene. I only use various backgrounds when taking photos of my own models. Most of the time, a scene is not taking place in a manner that is parallel with the edges of the foundation which intensifies the viewers´perception and the depth of the scene. The construction of my own dioramas often goes hand in hand with a great deal of research of the settings of a given period, or specific battles or events that I am attempting to depict. While researching the setting, I use books, period photographs, drawings, and publications regarding specific types of vehicles or weaponry, and the internet. With proper research, on should not succumb to excess in the form of, for instance, using a tank in the re-creation of a specific battle that took place in 1942, as the tank was not produced until 1944. It won´t deceive experienced model builders and it gives the casual viewer historical half-truths at model building contests. After looking at a diorama, an independent viewer must leave with a feeling that makes them think, "Yes, it was something like that at that time." This is what I believe is a diorama’s main asset: the entire scene actually creates a kind of window to the past.

In the beginning, I understandably paid my dues in the form of megalomaniacal scenes in which the end result of my projects was a large foundation with one vehicle in the middle and two or three figurines around it. That didn’t matter. The driving force was my enthusiasm and joy from the results. I studied methods diligently, I tried some of my own, I started to use patinas, and I started to bring my figurines to life with moderate attempts to play with light and shadow.

Each new diorama always surpassed the one that I had built before it and I knew that I was on the right track. I understood that the construction of a diorama is actually a kind of model builder’s "triathalon" in which it is necessary to position vehicles and weaponry properly, play around with the figurines and manufacture the terrain in such a way that it corresponds with reality. What good is a perfectly constructed vehicle, for instance, with poorly painted figurines and shabby terrain? It was essential to ensure that these three elements were in harmony with one another and I concentrated very hard on this. These elements complement each other and produce the final result in the end. 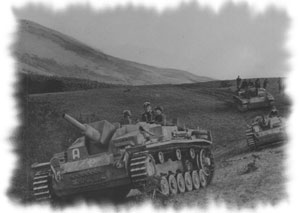 It didn’t take long for me to also realize that an arsenal of pincers and manicuring scissors, supplemented with a blunt scalpel would not be enough. Therefore, I gradually invested in tools, colors, a spray paint gun, and a compressor.

I still remember the day when I first brought home a TAMIYA SPRAY WORK set and this "sewing machine" resounded through our household. I don’t have it anymore, but it was another evolutionary step in my model building and I will always have fond memories of this machine. I also eventually began to work with etching and after about half a year, I understood that instead of bending them using pincers and various prisms, a bending tool dedicated to this task would be a good investment. Everything progresses in its own way. I have experienced moments of total zeal, as well as moments of huge disappointment when things have not worked out the way I expected. And that is probably the driving force behind all experiments, experiences with new methods, and the purchase of other tools and aids.

I became more and more enticed by model building competitions, where I got to meet more experienced model builders, who shared plenty of advice, ideas, and tricks of the trade with me. These events also enabled me to buy plenty of supplies, tools, and kits. The thrill of these competitions stays with me to this day. I am very pleased that I can now participate in them as a competitor. I still remember the joy I felt when I won my first award. I value every prize I have won, but, on the other hand, I have to say that I don’t regret participating in any competition in which I don’t win a prize. I have many good friends in the model building community and they make the occasional trip to an event worth every minute I spend at them.

In model building, it is probably never possible to say that you can’t learn something from someone. Personally, I always discover more methods and learn something new. I’m amazed by the work of my fellow model builders and in nearly every model I discover something that I have yet to accomplish. As I said before – a person is always learning. The next stage in my growth is the building of this website.

So once again, I welcome you and invite you to join me in the fascinating world of dioramas...